NOTE: This restaurant serves alcohol. All meat is halal and no pork is served on the premises. This restaurant uses a number of suppliers. The high quality steaks are accredited by the Australian halal development and accreditation committee (AHDAA). Other meats are supplied by a mix of HFA and HMC suppliers.

31. Thirty-one. 3-1. Sounds crazy when I think about it and even more so when I say it out loud – how time flies! Still though, not being one for a fuss, I was happy to keep the celebrations low key to the point where it’s just a standard dinner with friends (basically what we do every few weeks), but with the addition of a cake and some embarrassing singing to go along with it.

Initially, as usual, we were bored of burgers and steaks and were keen to avoid. However, as usual, we typically ended up choosing a steak. In my defence, having tried EatMeat at new year in Manchester, I was excited at the prospect of being able to take my friends to a restaurant with the same concept – the ability to sear your steak on a hot plate and be totally responsible for the resulting bite.

Rockit is a fairly large establishment with one of them industrial looks – like a restaurant come warehouse with all the pipes above us and no ceiling. To be fair, the place was clean, spacious and warm – that was good enough for us. One thing I will state upfront is that one of the owners amusingly had a business card with the title ‘Head of toilets’. At least it was amusing – until I entered the toilet and saw neon lights and a big F off widescreen that I would happily plonk myself in front of if the game was showing.

Onto the food. The starters were much like the trailers before the film starts at the movies – especially for a steak place – you’re forced to sit through them before the main event, but sometimes you actually enjoy them. To share, we ordered a couple of portions of chicken bites, halloumi and watermelon (weird combo attracted us but it literally was halloumi and watermelon side by side). Lets just say there was nothing wrong with the food but clearly you won’t choose to come here for the starters – and in reality, it’s fine to just skip them and go straight for what you came for.

Being 31 also emphasised my new found determination to be responsible with money. With that in mind, I decided to steer clear of the wagyu and instead opt for a reasonable Fillet steak at £25.99 for 8oz/ 226g. This was the choice of most of the gang except a couple of weirdo’s who went for the jerk chicken steak. I’m not even going to bother reviewing their food, because if you order chicken at a steakhouse then only God can help you.

Our fillet steaks arrived as expected on a hot plate sizzling ready for us to get stuck in. We were instructed to put on our apron/bibs to protect our clothes from the sizzling hot plate and the risk of spluttering. It was great to see the inside of the steak pretty much raw knowing it’s fate lies in our hands. A great little knife was also provided which was a cross between a cleaver and a steak knife (we were all also very kindly given a fresh one as a gift and the end of the meal which we were chuffed with). The steak was definitely a cut of fillet, barely any fat and a juicy, tender texture. I sliced a bit off and tested the searing. A couple of seconds later it basically cooked to medium and was ready to eat. The meat was tender and satisfying – I was content with my decision. The rest of the gang felt the same so the fillet was a big hit. The only gripe I had is that personally, the Guji in me craves food that has a kick, not necessarily spice but just something more than just salt the fillet was marinaded in. Others didn’t feel the same so maybe I’m an isolated case. To make me feel better, we did order gravy/sauces – peppercorn, blue cheese and garlic which did help the situation. As per usual, we ordered chunky chips to keep the steak company.

Overall, it was cool to show the searing process to my friends and I enjoyed eating every bit of the steak super hot. Maybe more of a reflection on me than anything else, but I struggled to get the consistency right bite after bite as time went on as the hot plate felt like it lost heat after a while, which meant a 2 second sear at the beginning would be perfect but a 5 second sear later still wouldn’t cook the steak how I wanted – leading to eating one well done, another medium and another medium rare. Having said that, it was my own laziness and I could have asked for the hot plate to be replaced at any point, but I just wan’t that bothered.

Jugga was also present – and no prizes for guessing what he ordered…yep.. the 1.2kg /42 oz Tomahawk at £39.99. It was massive – with a massive bone and he looked like Fred Flintstone eating that thing – especially considering it arrived pretty rare and needed to be seared on the hot plate. I took a bite and was pretty impressed with the quality of meat. If you are serious about your food, you won’t regret ordering it, and in this case, Jugga didn’t really talk for the rest of the meal – he may as well have had a sign around his neck saying do not disturb – men at work. 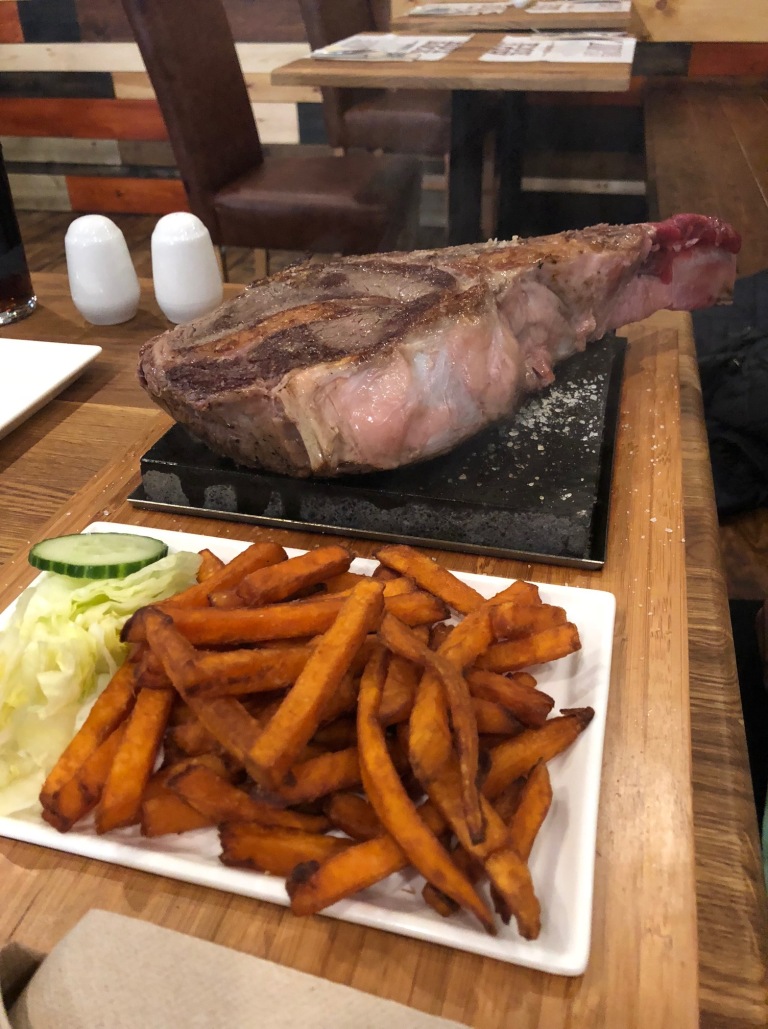 Throughout the meal, service was impeccable and after the meal we had a good talk with the owner who was more than happy to engage in a laugh and joke as well as provide some great insight into his business.

Overall, given the uncommon nature of the sear it yourself concept in London, this makes a great place to go for steak safe in the knowledge you are responsible for your own food, whilst simultaneously providing a buzz among your dinner buddies which makes for a fun evening. Turns out I’m able to cook a steak pretty much to my liking – not bad – it’s only taken Thirty-one years.